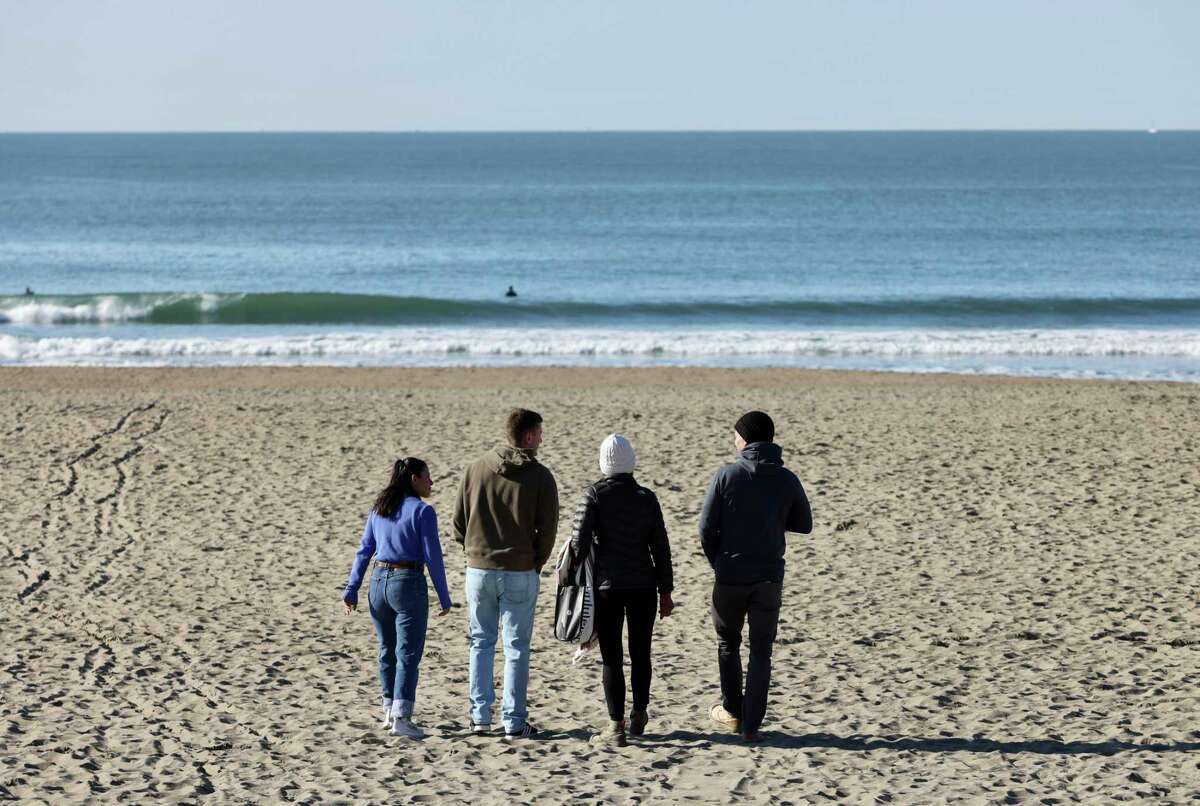 Monica Gomez and Lucas Moore first saw a surfboard floating a dozen feet off Ocean Beach in the fading light of a stormy evening on Dec. 3.

Then they saw a body facedown and limp beside it in the water.

The couple, the last remaining surfers at Kelly’s Cove on the beach’s north stretch, dropped their boards and sprinted toward the water. Gomez turned to the first person she saw on the beach — Griffin de Luce, in the middle of filming his wife holding their 3-year-old daughter — and told him to call 911.

The couple rolled the unconscious surfer onto his back and dragged him onto shore. They unzipped his wetsuit hood, turned him on his side to clear his airway, then started CPR.

The waves were rising, so Moore and de Luce, who had rushed to help after making the 911 call and handing the phone to his wife to talk to the dispatcher, pulled the man to higher ground as Gomez supported his head. De Luce remembered the surfer’s body was cold, his lips blue, his eyes open but staring blankly.

That’s when the man inhaled a ragged breath and coughed up salt water and ocean foam — to the relief of his rescuers. De Luce held back the man’s head, kept talking to him and tried to warm his body, using his daughter’s scarf around his neck, until first responders arrived.

Two weeks later, overlooking a sunny Ocean Beach, the now-recovered surfer and his wife stood with Moore and Gomez.

“I’m so grateful to be alive,” the 56-year-old father of two said. “It just gave me such an appreciation of life and happiness. I wake up every morning and go to bed happy.”

The Chronicle helped connect the man and his rescuers via the Fire Department, which responded to the scene and had been in touch with the Good Samaritans, after the man’s sister-in-law read a Chronicle story about the rescue and reached out to a reporter.

The Chronicle is not naming the surfer or his wife at their request, but the couple wanted to share their story to highlight the rescuers. The surfer’s wife said that the UCSF emergency room nurse who treated her husband told them that their actions to start his breathing were lifesaving.

The surfer was knocked unconscious after a wave broke abruptly over him and pushed him down. He was out for an estimated five minutes before Gomez and Moore pulled him from the water, according to time stamps in a video the surfer obtained from a privately run surfing camera, common and available to the public on beaches around the world, and de Luce’s 911 call.

If it had been longer, he could have suffered serious effects from lack of oxygen, his wife said.

He lucked out in the trio that found him. Gomez, 23, works part time as an emergency medical technician for an ambulance company while studying premed at UC Berkeley. Her boyfriend, Moore, 22, trained as a lifeguard. And de Luce, 52, learned first-aid as a Boy Scout.

The Good Samaritans wanted to highlight the dangers of the ocean and surfing alone, and the Fire Fepartment and rescuers stressed the importance of learning CPR and taking action in crisis situations.

“There’s such a spectator culture in our society,” de Luce said. “Often that’s all it takes is one person breaking the paralysis of the moment and leaping into motion to get everyone to pull together.”

The surfer said it’s “incredible being able to make the right decision and doing it.”

“That’s true leadership to me,” he said, motioning to Moore and Gomez. “These kids have such a good, promising future.”

The man’s near-death experience started on the afternoon of Dec. 3 when he wrapped up his work as a consultant at his Larkspur home and called his wife, out of town visiting her family, to let her know he was going to the beach. He has been surfing for 20 years, 15 of those at Ocean Beach.

He hit the waves sometime after 3 p.m., and Moore and Gomez arrived at the beach around 4 p.m., joining half a dozen other surfers. It was raining, the waves were rough, and the current was fierce. Gomez couldn’t push past the waves to a calmer break point, so she sat on the beach.

Moore made it out, but returned to shore after 4:30 p.m. He thought he was the last to leave, but Gomez noticed she couldn’t see one surfer she had spotted earlier, so she suggested they walk in that direction to check.

About 100 feet north along the beach, the surfer had been trying to catch a wave at 4:44 p.m., but he wasn’t able to stand up before the foam crashed on top of him and pushed him down, according to the surf cam footage.

He doesn’t know what knocked him out — whether whiplash or hitting his head on the sandbar — but his next vague memory is coming to briefly in the ambulance. His next vivid recollection is waking up in the hospital the next morning, where he was finally able to tell his medical team who he was and have them call his wife.

Her messages and calls to him the night before had gone unanswered, but she’d rationalized herself out of worrying too much because an Apple tracker showed his location as home — mistakenly tied to his iPad instead of his iPhone in the car at the beach.

As soon as the man’s wife got the call from the hospital, she hopped on a plane with her sister to rush back to San Francisco as their daughter hurried to the hospital, arriving in time to watch a World Cup match with her dad as planned.

The man left the hospital on Dec. 7 and immediately wanted to find and thank his rescuers. He didn’t know it, but the trio had been asking the Fire Department for days for updates about his fate. After The Chronicle made the connection, the Fire Department put them in touch.

The man and his wife’s first video call with de Luce on Dec. 8 was filled with a lot of tears — but de Luce’s daughter also burst into a smile when she recognized the man as the surfer she had seen rescued at the beach.

“Thank you so much for everything you did for me!” the surfer texted Moore the same day. “You saved my life. I am so grateful. You are the true hero.”

The three couples, plus Moore’s mom who lives a couple blocks away from Ocean Beach, met in person on Dec. 10 at Rustic Bakery in Larkspur. They described it as a surreal, overwhelming and emotional experience, with tears and hugs. The surfer and his wife gave de Luce’s daughter two stuffed animals.

De Luce has since returned home to Nevada, but visits family in the Bay Area often. The group is planning a hike in the East Bay in the new year, he said.

“We’re all connected, friends for life,” he said. “When you go through something like that with someone, with anyone, it doesn’t matter what color their skin is, what socioeconomic class they are, when you go through that proximity to the veil between life and death, you just realize we’re all just humans and we’re all just walking each other home.”