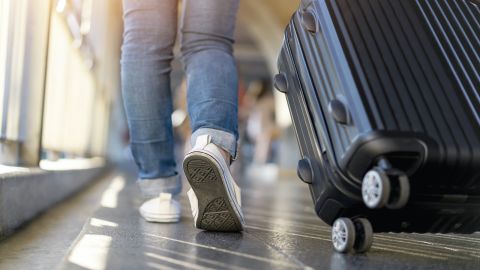 The concept of booking your flight on a specific day to save a bit of money has become one of the most common pieces of quasi-advice among travelers. But the popular travel myth might be just that — a myth — as flight prices these days depend on demand, not the day of the week.

“While there used to be greater price variation depending on the day of the week you booked a flight, there’s less variation now due to pricing being handled algorithmically by computers,” explains Steve Oliverez, CEO of InsanelyCheapFlights.com.

This means that there’s really no magic trick to ensuring you outsmart the booking website and get the cheapest deal every time. That said, it doesn’t mean you have to concede to paying a premium for your flight. We spoke to budget travel experts to get their top tips on exactly how to find the cheapest flights as well as some of our favorite services for helping you to find cheap airfare.

Let’s get this out of the way: There is no best day or time to book a flight. “Despite many reports claiming Tuesday or Wednesday mornings are the best time to book flights, there is no evidence of that being true,” explains Phil Dengler, founder of TheVacationer.com. “Cheap flight prices are available 24/7, so you should not limit yourself to a particular day or time.”

“I regularly search for and book flights and have found great deals every single day of the week,” adds Dengler. “Flight prices depend on complex algorithms, and the day of the week is not one of the factors.”

What still matters is the day of the week you’re actually looking to fly and how far in advance you book the ticket, says Oliverez. Early to midweek tends to be cheaper on off-peak days, and as a rule of thumb, the busier the weekend, the more the flight is going to cost.

“I’ve found that it is generally cheaper to fly on Tuesdays, Wednesdays and Saturdays,” adds Dengler. “That is not a hard rule, but I have found it to be the case the majority of the time.”

Ultimately, you want to remain as flexible as possible when considering travel dates. Because flight prices vary based on demand, tickets are more likely to be pricier on more in-demand days, like Fridays and Sundays, according to flight deal website Scott’s Cheap Flights.

In addition, consider picking the destination you want to visit before picking the dates you want to travel — and then consider alternative airports around that main destination. Allowing yourself the flexibility to search for cheaper fares throughout the calendar year will allow you to pick the cheapest dates to fly, which may typically fall in the shoulder season.

“Picking travel dates before you look at flight prices almost always leads to you paying more than you have to,” says Dengler. “You should always pick a destination and find the cheapest days to fly to that destination. Those savings increase the bigger your party is, and you may only have to fly a day or two earlier or later than you originally intended.”

Just like the myth that there’s a cheapest day to book flights, there are plenty of other common flight-booking myths that’ll cause you more hassle than dollars saved. For example, clearing your browser’s cookies or searching for flight prices in incognito mode will not change the prices shown, says Dengler. Many factors influence flight prices, but your personal search history is not a factor. While it will not increase prices, it’s a waste of time.

Ultimately, if you’ve got a specific destination in mind, the best advice is to check on prices often. Because airline pricing algorithms change all the time, you’ll want to check your flights as much as possible, but there is some general guidance about how far in advance you should look to book.

Generally speaking, you’ll want to aim to book your domestic flight itineraries between one and four months in advance of your travel dates. Do it too far away and you risk paying too much, as airlines tend to release their schedules — and higher-than-expected fares — about one year in advance. Book too close-in to your travel dates and you risk paying much more, as airlines look to inflate prices for those looking to get away with little notice.

If you do need to book close-in to your travel dates for whatever reason, try looking at vacation packages for lower prices. “I recommend that you try searching for a hotel and flight package, as the total price doesn’t go up as much for these and may actually be cheaper at the last minute,” Oliverez says.

International trips tend to take a bit more planning, so you may want to book further in advance. Plus, you’ll have more time to monitor average flight prices on your route so you know what’s reasonable and what’s too much.

Generally speaking, you should start looking for international flights about 10 to 11 months in advance of your travel dates. The key is to check regularly so you can see as prices fluctuate from week to week or month to month. You should aim to book about five to six months in advance.

Google Flights offers a helpful tool in its price graph, which lets you know if a given itinerary is lower or higher than average. You can also track flight prices and how they’ve fluctuated over the past few months to help you guide your decision if you should book now or later.

Keep in mind that if you’re after the cheapest airfare, you may want to consider booking in the opposite season, says Scott Keyes, founder and chief flight expert at Scott’s Cheap Flights. For summer travel, begin thinking about your flights in the winter before. And if you’re looking at booking holiday travel, start thinking about those plans in the summertime.

Thankfully, there are a number of services that allow you to find cheap flights easier. Take the legwork out of searching yourself and rely on the cheap flight experts instead. Here are some of our favorite membership-based and free services.

From $59.99 per year at Thrifty Traveler

With a Thrifty Traveler Premium membership, you’ll be able to customize your flight deal results by entering your home airport. From there, the service will send you instant email alerts to destinations all around the world. In fact, the service says it’ll save you up to 90% on every flight. There’s a 100-day guarantee, so if you’re not happy with the flight deals you’re receiving, you’ll be refunded. As opposed to an annual membership, you could instead opt to pay in monthly installments of $9.99 for all of the same flight deal benefits.

From $49 per year at Scott’s Cheap Flights

With an Airfare Watchdog subscription, you can enter your departure airport for curated deals sent directly to your email. You can also identify a route for which you want specific deals, which will be delivered up to seven times per week. This service is about as straightforward as it gets — and you’ll be rewarded with cheap airfare.

From $49 per year at Jack’s Flight Club

Jack’s Flight Club offers both a free membership and a premium version. With the free membership, you’ll get one to two cheap flight deals every week directly to your email. However, with a Jack’s Flight Club Premium subscription, you get access to four times as many deals, the ability to choose your home airports and more. The Premium subscription offers a 30-day money-back guarantee.

By becoming a member with Kayak, you can set flight alerts on specific routes. You’ll need to specify the routes and set individual alerts for each rather than having deals to any destination sent to your email. However, it’s free and a great tool to use if you’ve got specific plans already in mind.

Google Flights is one of our favorite sites for searching for flights, and you can also use its free price-tracking service. Similar to Kayak, you’ll need to select a specific route and dates of travel, then Google will send you alerts when the price changes on that route. Unfortunately, you can’t get deals from a certain city to any destination as they come up, but you can track flights if you’ve got specific plans in mind.

From $69 per year at Dollar Flight Club

A Premium membership with Dollar Flight Club means you’ll get up to four flight deals sent directly to you per day — either by app push notification or email. You can set personalized options, such as your favorite airline, departure airport and your dream destination. There’s a free membership option available, which grants you access to one flight deal per day. You can also bump up to the highest membership tier, Premium Plus, which comes with a $99-per-year price tag and grants you access to deals in first class and business class.

Ultimately, when it comes to finding cheap airfare, don’t fall victim to the common myths of having to book on a certain day or clearing your browser’s cookies. Airfare varies based on demand and several other factors, and thankfully, there are plenty of tools out there to ensure you get a good deal.